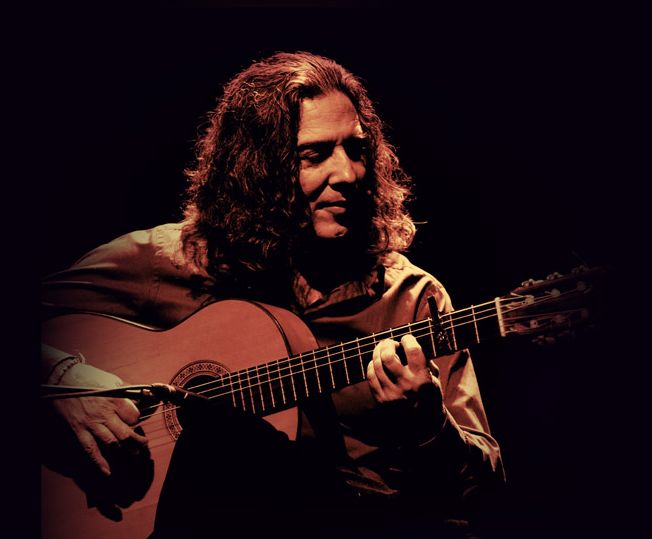 Are you a fan of flamenco music? Would you like to take a journey through these sounds?
There could not be better opportunity to spend an unforgettable evening with the legendary Tomatito in Gdansk, Poland. At special invitation of Marcin Kydrynski, polish radio broadcast journalist – it will be possible to take part in this ”journey”!

Why should you go to the concert?
Tomatito became a flamenco sensation at an early age when he was discovered by famed guitarist Paco de Lucía and began working in part with legendary flamenco singer Camarón de la Isla.

In 1979, the trio produced a hit called La Leyenda del Tiempo. Their partnership continued until Camarón’s death in 1992. A later collaboration included pianist Michel Camilo, producing the albums Spain (2000) and Spain Again (2006). Tomatito’s music is a unique mix of traditional flamenco and jazz. On some albums, such as Barrio Negro, he experimented with Afro-Cuban and Brazilian Music. He has also worked with flamenco singers Duquende and Chano Domiguez among many others. Tomatito has produced six solo albums and in 2005, won a Latin Grammy for Best Flamenco Record, for his album Aguadulce.

Tomatito incorporates elements of jazz in his style of flamenco. His music for the film Vengo, directed by Tony Gatlif, won the César Award for Best Music Written for a Film in 2001.
Besides of that, Tomatito was born in ALMERIA, in the south part of Andalusia. It is special place for me because I spent there one of my most beautiful period of my life.
There could be a great chance to talk to Maestro – about Music, Life, Spanish Culture.

READ A VERY SPECIAL INTERVIEW WITH TOMATITO before his show @ SIESTA FESTIVAL 2016!

You played with the biggest guitarists in the world and now you are called a Master of spanish guitar, how do you feel as a the greatest flamenco guitar player?

I AM NOT THE GREATEST NOR DO I CONSIDER MYSELF TO BE MORE IMPORTANT THAN ANYONE ELSE.  I AM ONE OF MANY SPANISH GUITARISTS EACH OF WHOM AS THEIR OWN APPROACH AND STYLE. ITI S TRU I HAVE PLAYED WITH MANY OUTSTANDING MUSICIANS AND SINGERS BOTH INFLAMENCO AND OTHER SPHERES BUT I AM STILL LEARNING AND DEVELOPING, EXPERIMENTING. MY ONLY AIM IS TO PRESERVE THE AUTHENTICITY OF THE GYPSY GUITAR STYLE IN FLAMENCO, BUT THIS IS  NOT THE ONLY WAY TO PLAY OR TO PERCEIVE FLAMENCO.

And why “A little tomato” plays with “a prawn”?

MOST FLAMENCOS, AND MOST GYPSIES HAVE A NICKNAME BY WHICH THEY ARE KNOWN.  I WAS THE LITTLE TOMATO AS MY GRANDFATHER WAS ROUND AND RED FACED. CAMARON WAS BLONDE AND SKINNY SO HE WAS KNOWN THAT WAY. OFTEN THE NAME HAS TO DO WITH FOOD, CHARACTER TRAITS…ONE SINGER I WAS CLOSE TO WAS CALLED “MALASHECHURAS” MEANING THE UGLY GUY.

You  composed a music of Carlos Saura movies – Flamenco, Flamenco II. The whole world saw Tomatito. What do you fill as you recall a working with this great moviemaker?

CARLOS SAURA IS RESPONSIBLE FOR THE UPSURGE IN FLAMENCO POPULARITY IN THE EARLY 90’S. HE IS  A MAN OF GREAT MUSICAL AND AESTHETIC TASTE AND HAS A WONDERFUL UNDERSTANDING OF THE WAY FLAMENCO WORKS VISUALLY TOO. THE GREAT THING ABOUT HIM IS THAT HE LETS THE ARTIST BE HIMSELF AND SURROUNDS HIM WITH THE RIGHT AMBIENCE AND BACKGROUND.

What is flamenco? Is it a style of a dance? Is it a kind of music or maybe is it a way of life?

IT’S A WAY OF LIFE FOR ME, A WAY OF BEING, EXISTING.
APART FROM A GENRE OF MUSIC AND DANCE IT IS MANY THINGS  THAT I WOULD SUM UP AS A PARTICULAR TYPE OF “FREEDOM” VIS A VIS LIFE.
ALL GYPSIES ARE FLAMENCOS, BUT NOT ALL FLAMENCO PERFORMERS ARE GYPSIES. BASICALLY IT IS AN 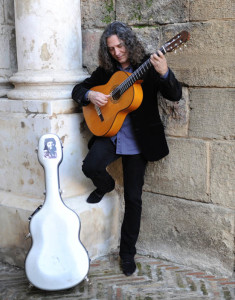 ORGANIC ELEMENT,  A FORM OF LIFE IN ITSELF.

Sometimes your son is your partner on a stage – the next generation of musician family. Is any different to play with own son or play with other musicians? What is easier: being a dad or being a master?

IN MY CASE FATHERHOOD IS HARDER. MY SON HAS ALWAYSBEEN ENTHUSIASTIC AND HARD WORKING WITH THE GUITAR, I DID NOT HAVE TO PUSH HIM. AS A TINY CHILD HE KNEW HE WANTED THIS IN LIFE SO THERE HAS BEEN NO PRESSURE EITHER WAY. HE HAS AN AMAZING EAR AND IN MANY WAYS HE IS QUICKER, MORE ALERT AND HAS MORE NATURAL TALENT THAN I HAD. HE IS THE YOUNGEST AND CAME AFTER SIX GIRLS, SO YOU CAN IMAGINE THAT IT’S BEEN DIFFICULT NOT TO SPOIL HIM AND HARDER TO DISCIPLINE HIM….PLAYING TOGETHER IS THE MOST NATURAL THING IN THE WORLD THOUGH. MY SON WILL JOIN ME WHEN WE PERFORM IN GDANSK.

Flamenco is rather niche kind of music but everywhere we are and listen at least first sounds of spanish guitar we love these sounds. What is so special in flamenco in your opinion?

I’M STILL TRYING TO WORK IT OUT…….SOMETHING TO DO WITH THE EXTERNALISATION OF EMOTION. FLAMENCOS DO THIS WITH MORE EASE OR MORE NATURALLY THAN OTHER MUSICIANS. ALSO IT MAKES PEOPLE FEEL ALIVE, IT PENETRATES DEEP, IT STIRS INNER FEELINGS…FLAMENCO MUSIC, SONG AND DANCE RUN THE WHOLE GAMUT OF THE HUMAN EXPERIENCE AND AUDIENCES RESPOND TO THIS.

On what we may expect during your Polish concert in Gdansk?

ITS AN ALL MALE GROUP THIS TIME, SO IT WILL BE A MIXTURE OF OLD AND NEW STUFF. LATELY I WORK WITH AN ELECTRIC BASS WHICH ADDS DEPTH AND I HAVE TWO AMAZING SINGERS….THERE IS A GREAT APPRECIATION FOR FLAMENCO IN POLAND AND I HAVE FOUND AUDIENCES THERE TO BE VERY RESPONSIVE AND KNOWLEDGABLE ABOUT WHAT THEY ARE LISTENING TO OR WATCHING. SO THAT’S WONDERFUL FOR ME AND I LOOK FORWARD TO PLAYING IN GDANSK,

Tomatito was interviewed by MACIEJ FARSKI.