As a Star during “Nights of Fado” in Gdansk, I would like to present our fantastic Friend from Portugal as well as my peer – since we are at the same age. Ladies and Gentlemen: Marco Oliveira!

A few words about this outstanding young fado singer.

Always listened and sang fado in his house. At the age of 9, Marco Oliveira accompanied for the first time his parents to a fado house, “The Alfama Dragon”, an experience that definitely ignited his passion for Fado. The following year, at age 10, he won the first Youth Award in the Great Fado Night in Lisbon Coliseum, and in 2004 repeated the feat, winning the first prize in the senior category in the Great Night of Fado in São Luiz Theatre, confirming the many victories in various Fado contests.

However, Marco Oliveira felt the need to deepen their connection to Fado, beginning to study classical guitar at 13 years of age, Vitorino Matono Institute in Lisbon. As he was 15 years old, enters the National Conservatory, where he continued his classical guitar studies that extracted and transposed precious teachings for Fado. The vocal level, although some enthusiastic chorus of lessons, highlights the importance of breathing techniques. Alongside their academic training, however not forget the importance of fado while learning, the daily contact with experienced artists, lovingly pointing out the availability of Fernando Mauritius to support and teach the younger ones. It is all this melting pot of teachings that blunts his artistic plurality, as an author, composer, singer and musician Fado.

Marco Oliveira is nonetheless considered as an integral part of the interpretation of fado, which often takes this role as singer / storyteller.

FURTHERMORE, please read a special INTERVIEW WITH MARCO OLIVEIRA only for SIESTA FESTIVAL!

You were on our ‘Nights of Fado’ last year. What do you think about these concerts, these audience? Are they a similar to evenings with Fado in Lisbon? What is your opinion?

Those nights in Gdansk make me remember the nights in my hometown, when we feel the breath of silence among each song, between hope and longing from people who sigh together. As if we get closer to the portuguese soul. This is something really special and it’s a great pleasure for me to sing during those evenings. I remember walking and writing through this beautiful city, too. I know it will be inspiring once again.

It will be your second visit in Gdańsk on Siesta Festival. The first time a leader was Helder Moutinho but this year you will be a great star of Nights of Fado. How do you fill in this different role?

When I play and sing as a leader, I feel like I have a different approach. I can present my own compositions and poems to the audience. And even refer my own fado references. But, for me it’s always a magical ambiance to share the stage with another singer and musicians. Fado is this unique way of expressing a moment in life. And this moment must always be shared.

Helder said me that in his opinion the real fadist may be only a man who was born and live in Lisbon. Are you agree with this? Why?

This is an interesting question. Actually, you need to be a Lisbon bohemian to better understand the essence of this kind of song. You may not have been born there, but you need to enter in the veins of Alfama and Bairro Alto, Madragoa and Mouraria, to be deeply moved to a certain “epoque”. It’s like knowing tango without knowing Buenos Aires.

You are a guitar player, accompanist, composer. What of roles is more attractive to you? 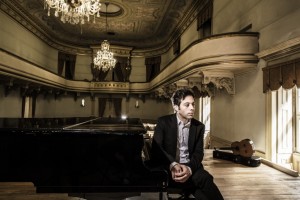 Everything I’m doing at the moment is important to me. I like to challenge myself in each of those three things you say, so that in the end everything can complement. I write everyday, even if it’s poemas or texts that won’t be published. For me it’s something so natural as breathing. And it’s exactly the same for playing and singing, I can’t imagine how life would be without it. I guess in some point of your life you stop thinking and just keep flowing.

When you write w new song what is easier for you: when you write for yourself or for the others?
Do you know on the start that this song is for different person, not for you?

It’s easier when you understand what you want and you need to express. There are songs and poems I know so profoundly that I can’t just let them go, you know? But when we think about someone else’s voice, it’s a wonderful feeling. Because you really trust your words to someone, and see the way it grows.

Fado generally is a tradition. Is any evolution of this style in your opinion? What does it mean Fado in XXI century?

Maybe there are some differences, I don’t know. But if you watch the history of fado, since the beggining of XXth century you have a popular song played by a portuguese guitar and a classical one. It’s still like that nowadays, even with the experiments of including many other instruments. Poethical structures and traditional melodies remain also the same. I guess evolution is not the word, but maybe rediscover things from the past must be the true path. Amália used to say that Fado is a simple song, there’s nothing to understand.

You will have three concerts on Siesta Festival this year. It will be the same show or you think about any surprises?

I haven’t decided yet, but people can expect some surprises. Honestly, I prefer to feel the atmosphere and choose the songs along the evening. Siesta Festival has got an incredible production team working with all musicians, so let me congratulate all of you. I will have Ricardo Parreira on stage with me, a good friend and a great guitar player, so I’m sure it will be amazing to play in Gdansk.

Marco was interviewed by Maciej Farski