Smooth Jazz by the Sea Weekend: Place & Event You should Visit!

Poland. Barely in Gdynia resounded the last notes of the Ladies Jazz Festival, and now you can get ready for the next musical experience with a softer variant of jazz.

At the turn of September and October 2016, Gdynia Sports Arena will host the stars of the Gdynia Jazz by the Sea Weekend (Smooth Edition). This year the audience of Gdansk-Sopot-Gdynia will enjoy the concerts of Matt Bianco (Mark Reilly), acting jointly with the Dutch New Cool Collective and with the band of Peter White. This line-up provides definitely a large boost of energy and positive vibrations.

Matt Bianco is a big star of the 80s. This group combined very skillfully pop with jazz and bossa nova with salsa. Adding to this combination the vocal of Basia Trzetrzelewska (became famous just as “Basia”), Matt Bianco conquered the European charts. Leader of the group – Mark Reilly in the next  years proved to be open to various musical experiments – like connecting acid jazz with Cuban rhythms, or touched even the disco style. The last musical change of the Matt Bianco’s leader is a cooperation with the Dutch jazz ensemble New Cool Collective in 2015. The effect of this musical meeting is the album ‘The Things You Love’ released this year. The presented music is a unique blend of jazz, dance, latin, salsa and afrobeat. Polish audience can count on a ‘charge’ of unusual musical experiences which undoubtedly provides this multi-instrumentalist band which counts eleven people on the stage!

The second star of Gdynia Jazz by the Sea Weekend – Peter White is coming to Poland already for the second time. His previous concert took place at the Congress Hall in Warsaw in 2006.

One can be sure that this year will be at least as effectively and dynamically. Peter White is coming to Gdynia with a very interesting ensemble of the accompanying musicians. On keyboards plays Oli Silk, who has on his musical account compositions in the first place of the list of Billboard Smooth Jazz.
On percussion instruments – Joe Becket, who has played, among others, with Spandau Ballet or Moby. On the drums – Marc Parnell – who cooperates with Matt Bianco, Jethro Tull, Dave Koze, Basia, Pet Shop Boys and Robert Plant. On the bass will play Frank Felix who was a member of Acoustic Alchemy. Besides of this group, he cooperated with Nelly Furtado, Gabrielle, Dave Koze or with Fatboy Slim. The mentioned band complements the Hungarian saxophonist – Zoltan Kato.

However Matt Bianco, together with the New Cool Collective released already a new album this year, Peter White as in the breaks between his endless touring, prepares a new record that will be released in the second half of 2016. So in Gdynia we will be able to listen not only the greatest hits like Bueno Funk, Promenade, Caravan of Dreams, but also premiere compositions.

The event ‘Gdynia Jazz by the Sea’ is not only concerts of stars, but also a review of music movies, musical event for children, as well as a great treat for lovers of free guitar workshop with Peter White. In the urban area there will also be a concert of the band from Wroclaw – ‘Slow’.

Detailed information on the Gdynia Smooth Jazz by the Sea Weekend visit:
www.jazzbythesea.pl
and  https://www.facebook.com/jazzbytheseaweekend. 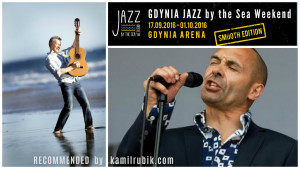 I suggest You as a MUST TO VISIT during this early Fall 2016!